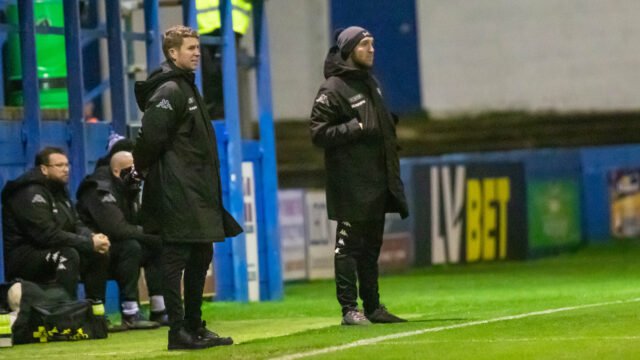 The ‘new normal’ is a phrase that is being thrown around a lot at the moment, but it is ultimately a lifestyle that we are all having to adjust to. Wearing a mask in a shop, sanitising our hands on a near permanent basis, and trying to figure out how long two metres actually is and whether the fella next to you is invading your personal space or not. On Saturday, though, an element of the familiar returns to Atherton as the Colls welcome Scarborough Athletic for the opening league fixture of the Northern Premier League. Competitive football is back.

We sat down with Manager Brad Cooke ahead of Saturday to discuss football in the ‘new normal’, recruitment, and the season that will soon be upon us. Cooke, as many know, has had many a pre-season campaign in black and white stripes. Though his first as Atherton Manager will always be remembered as his most surreal, ‘It’s been crazy. I’ve actually just thanked every single one of our lads, because it’s certainly been a pre-season where you question everything. You question the time away you have from your family, the time away you have from your friends. Although, one thing that it has done is make everyone appreciate the fact that they love football, and they love coming to Atherton Colls.

For me personally, it’s been near enough impossible. We finished in March and there was a lot of things to do at that point; tying players down, letting players go, drawing up a target list that ultimately kept changing. It’s been difficult because you’re then trying to keep on top of the squad’s fitness levels, and then you’re agreeing to sign lads when you don’t even have a start date. Then you’re thinking how are they going to bond? It’s just been crazy from start to finish’.

As the COVID-19 pandemic began to spread globally, mid-March saw the United Kingdom fall foul of the disease. The Northern Premier League season was swiftly cancelled, and the season null and voided; no promotion, no relegation, no 2019/20. Cooke reflects, ‘I do feel cheated out of last season, we did something incredible – we were on track to keep Atherton Collieries in this division. I really believe we would’ve done that. Over the course of the games from when I took over, the points total was greater per matches. We were on track to keep the club in the division – and in that initial period of time when Cleggy left, let’s have it right, that looked to be impossible. So I do feel robbed when we talk about null and void, we did have a bit of glory taken away from us’.

Since then it has been a slow and steady move back towards competitive football. July saw training given the nod, August allowed friendlies behind closed doors, and eventually in September the turnstiles at the Skuna Stadium started to click once more. All of this, despite, COVID-19 still very much making headlines in the news, ‘You can see sometimes that it has been a distraction, and you can see sometimes that it has been a leveller for some clubs. You’ve seen a lot of strange results this pre-season. I just think that is down to the training of the mind, and not being used to playing football again and being out the house training two, three times a week. It’s all been mentally draining as well as physically draining, and I think that’s showed. Full credit to everyone, though, because we have all clubbed together, and the lads have made a really good account for themselves’.

Cooke utilised the time off and worked with his management team to draw up a target list of players he hoped to bring to the Skuna. Jordan Darr, Kyle Sambor, Rick Smith, Marcus Cusani, Eliot Wynne, and Lewis Doyle all welcomed as Cooke’s Colls went from strength to strength. ‘There’s a specific style I like – I like front foot, I like aggression, but I love pace. And the latter was one of the few things last season I thought we lacked. Certainly up the top end of the pitch. We want to use that pace to turn teams around and squeeze high up the pitch. We’ve certainly recruited with pace, and I think everyone can see that. I am really, really pleased with the lads that we’ve brought in. They’re at an age where they need to develop, and will – that’s exactly the calibre of player we want to bring in at Atherton Collieries.’

This is going to be a long campaign with fixtures coming thick and fast. Key to this, Cooke believes, is preparation – ensuring various targets are met throughout the season. ‘We’ve broke it down into ten game units, we’re going into the first ten now. Obviously, we still take it game by game because football changes so quickly. But we have got targets in terms of what we want to achieve after ten games, and then we will move on from there. We’re not naïve enough to think we’re going to win every single football game. That’s not going to happen, there are a lot of good footballing sides in this division. The thing is, this summer, they’ve probably recruited and spent more money than ever. Which is crazy considering we are still very much in a pandemic. But there are sides that have strengthened in and around us, so it’s going to be tough. I relish that. I’ve always been an underdog, we’ll be underdogs in every single game we play this season and we’re really looking forward to that’.

The familiarity of competitive football has one welcome accompaniment, and that is fans back where they belong. The terraces of the Skuna Stadium will once again home supporters this Saturday, and Cooke sees this as vital to success on the field. ‘I don’t think the new lads have had a proper taste of Atherton Collieries yet. Everybody knows that it’s a great club. Everybody knows that there’s that spirit here; once you’re in, you struggle to get out. On Saturday the lads will really get to see what Atherton Colls is about. When the fans get behind us – which they will have to this season, because there will be tough times – they are like a 12th man’.

Atherton Collieries take on Scarborough Athletic at the Skuna Stadium on Saturday 19th September. Tickets are to be purchased at the turnstile on the day with capacity capped at 600. To avoid disappointment, we advise supporters of both teams to arrive at the ground as early as possible. There are various measures in place to help ensure the Skuna is a COVID-19 secure environment including track and trace, one way systems, and various hand sanitising stations throughout the ground.

Join us on this journey.