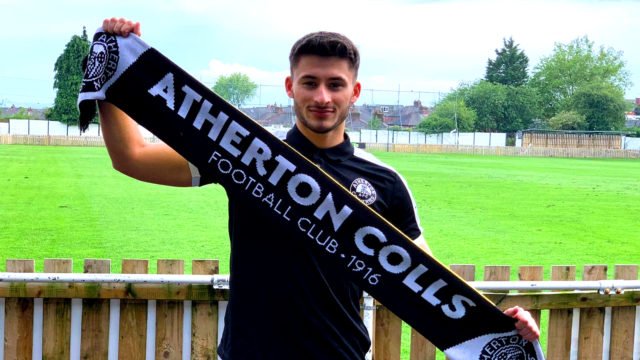 Atherton Collieries are proud to announce the signing of Jordan Darr, the first addition to our squad ahead of the 2020-21 season.

Jordan Darr joins from Charnock Richard of the North West Counties Premier Division, on the back of an eye-catching season for the Chorley side. Scoring 20 goals and picking up 12 man of the match performances in 29 games, Jordan’s efforts as a striker for the Greens played a key part as they challenged for promotion to the Northern Premier League.

Speaking on the signing, Collieries manager Brad Cooke said:
“Jordan was one of our main targets for this off-season. He is exactly what I want in a player and, more importantly, a person. He shows great intelligence for a 21 year old lad, who has been around at this level since he was 16 or 17, already learning a lot in his time. He had a great year last season, and we beat off a number of clubs to secure his signature. We are delighted that he has chosen to join us, he is ready to step up and continue his development, and he is a huge coup for the club”.

We would like to welcome Jordan to the Skuna Stadium, and we look forward to announcing further additions to the squad, alongside our retained list from the 2019-20 season, in the coming days.