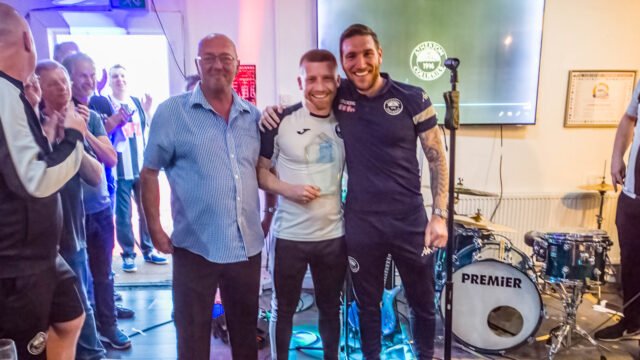 Atherton Collieries would like to place on record our gratitude for midfielder Danny Lambert, who has confirmed his retirement from football following five years at the Skuna Stadium.

Lambo was a summer signing for the Collieries in 2017, making his debut in the Reusch Champions Cup against City of Liverpool, where he collected an assist for Mark Truffas’ opening goal.

The combative central-midfielder quickly became a fans favourite, proving instrumental in his first season at the club as we settled following promotion from the North West Counties Football League.

The midfield enforcer was a vital component for the Collieries that season, playing a key role as the team went on to win the Doodson Sports Cup with a memorable final against Coalville, and this form carried into the subsequent campaign as the Stripes battled for, and ultimately lifted, the Northern Premier League First Division trophy.

“The player they called Rambo” has since played just an important role in retaining the Black & Whites place in non-league’s third tier, including scoring a memorable winner against Grantham Town on his 100th appearance earlier this season.

The dynamic midfielder signs off his Collieries account with 132 appearances to his name alongside 7 goals, with two winners medals alongside this season’s Manager’s Player of the Season accolade.

Danny Lambert would like to thank the fans for all of their support over the last five years, adding “It has been a pleasure! I look forward to coming and watching the lads and enjoying a beer with everyone.”

Manager Brad Cooke, who played alongside Lambo during his first season, also added: “Lambo was a pleasure to play alongside, and a pleasure to manage. He has been an amazing player for the club, full of heart and commitment and he will be sadly missed.”

“Danny goes out on his own terms, which for me is the best way to bow out as a player. He finishes his time in football winning the player of the season award, the perfect end to what has been a fantastic career. Good luck my mate!”