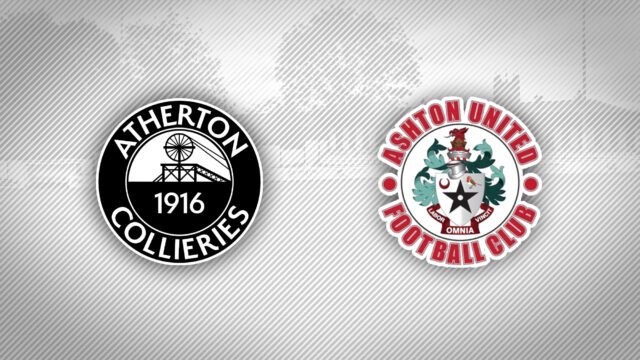 Following a three-week hiatus, football returns to the Skuna Stadium this evening as Atherton welcome Ashton United in the Pitching In Northern Premier League.

The last meeting between both clubs came on the opening day of last season. Indeed, the Colls’ first ever game at this level did not disappoint as the black and whites left Hurst Cross with a maiden point to open the campaign. The Collieries went behind just after the second half re-start, a corner that wasn’t dealt with adequately was drilled into the back of the net by Sam Sheridan. Atherton, though, were not daunted by this and soon responded on 63 minutes with a counter-attacking equaliser finished well by Brad Lynch. Sheridan, though, being United’s number one man pulled United in-front once more. The forward finished well once again with a corner that floated over the outstretched arms of keeper Theo Roberts and into the back of the goal. Determined to make a positive start to the season, the Collieries didn’t stop fighting and just minutes after Ollie Roberts equalised in style as he fired home Colls’ second leveller of the game in front of the jubilant away support.

Of course, a lot has happened between now and then. The most notable change has come in both dugouts, November of 2019 saw then Atherton manager Michael Clegg swap black and white for red and white as he was announced as United’s new gaffer. Days later, the patience of the Colls faithful was rewarded as former captain Brad Cooke took the hot seat at the Skuna Stadium. Naturally, we look forward to welcoming both Cleggy, his management team and all familiar faces in Ashton’s squad back to the Skuna Stadium this evening.

We are still in the early stages of the season but both managers will be looking for positive responses after disappointing results away from home. Clegg’s only consolation from a 4-1 defeat away at Matlock this weekend would have been United’s only goal from former Colls winger Ben Hardcastle. Likewise, Collieries Manager Brad Cooke will be himself looking for a reaction after the black and whites bowed out of the FA Cup with a 4-0 defeat away at National League North outfit, Guiseley AFC.

Various COVID-secure measures remain in place around the Skuna this evening and we ask for your support in following these; there is a one-way system in operation around the pitch, numerous hand-sanitising stations are available and we encourage all attendees to make use of these, please follow the markers around the ground and maintain a social distance, and if you are entering the Clubhouse then please wear a face covering until sat at your table. Tickets are only available to purchase at the turnstile, and with capacity capped at 600 we ask all supporters to arrive in good time. If you are a member of the 1916 Club and have not yet received your membership card, please give your name at the turnstile and you will be admitted.

As always, it will be great to see all Colls supporters once again, and everyone at the Club thanks you in advance for your support.