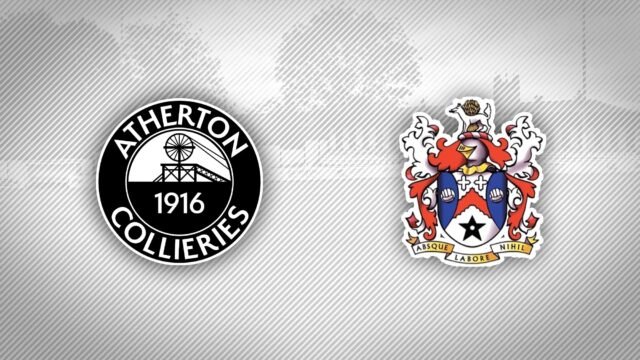 After a brief break, football returned to Atherton with a bang on Tuesday evening as Brad Cooke’s Colls picked up three points against Ashton United in a 1-0 victory. Games, though, are coming thick and fast and attention has quickly turned to tomorrow’s Pitching In Northern Premier League meeting with Stalybridge Celtic at the Skuna Stadium.

The two teams last met in early-March of this year in a game that saw Atherton progress to the third round of the Integro League Cup. Dominating a tremendous first half of football, goals from Ben Conway, Louis Myers (X2), and Danny O’Brien ensured a home tie with Marine in the next round of the competition. Of course, we all know what happened next, that game with Marine eventually cancelled along with the majority of U.K. football competitions.

Cooke will be looking for his side to build on the momentum earned on Tuesday night. A fine attacking move led by Dylan Glass made the difference on the evening for the Collieries, the forward chipping over former Atherton stopper Greg Hartley. Stalybridge, on the other hand, have yet to pick up a win so far this season and will be looking to make amends for this sooner rather than later. Their most recent result was a 4-0 away defeat at promotion hopefuls Buxton. Saturday’s match ball is sponsored by M Logan, and we thank them for their continued support.

Various COVID-secure measures remain in place around the Skuna and we ask for your support in following these; there is a one-way system in operation around the pitch, numerous hand-sanitising stations are available and we encourage all attendees to make use of these, please follow the markers around the ground and maintain a social distance, and if you are entering the Clubhouse then please wear a face covering until sat at your table. Tickets are only available to purchase at the turnstile, and with capacity capped at 600 we ask all supporters to arrive in good time. If you are a member of the 1916 Club and have not yet received your membership card, please give your name at the turnstile and you will be admitted.

As always, it will be great to see all Colls supporters once again, and everyone at the Club thanks you in advance for your support.