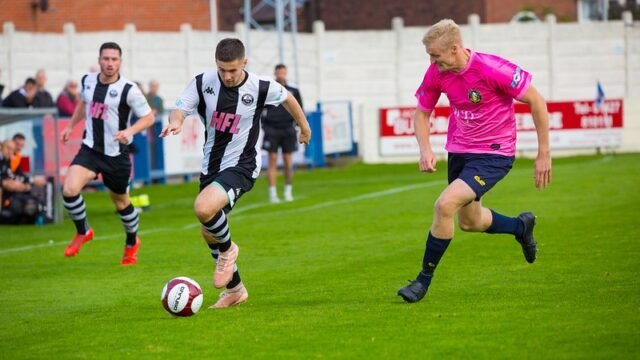 The Collieries take on Gainsborough Trinity this afternoon in what will be only their second visit to Northolme.

Manager Brad Cooke will certainly be looking for a reaction after last weekend’s defeat at the hands of Mickleover. Stuart Beavon fired home in the dying embers of the game to rob the black and white stripes of at least a point. Cooke was disappointed with his side’s performance, “I think they deserved to win, we were flat. It was a flat game and it is disappointing. The lads know my feelings on it, it happens in football and we just need to refresh, recharge and go again.”

Gainsborough Trinity, on the other hand, find themselves undefeated in their last six. Their most recent result a credible 0-0 draw away at Stafford Rangers. Head Coach Tom Shaw was pleased with Trinity’s solid showing in Staffordshire, “Every away point is huge for Gainsborough Trinity. We were well worth the point. Towards the end of the game, we had a couple of interesting openings where you hope the lads can just find the final pass. This six-game unbeaten run, for me, has been based on attitude and application.”

The last time Atherton visited Trinity’s Northolme Stadium was back in the 19/20 season. Cleggy’s Colls saw off the Lincolnshire-based side with a convincing 2-0 victory. Tom Bentham converted from the spot for the opener following a Gaz Peet foul in the area, before Jordan Cover doubled the advantage in the second half. Cover’s goal was overshadowed, only ever so slightly, by the surreal image of the ball bouncing against a road cone in the back of the net. What was that road cone doing there? Who knows, but it certainly provided the cherry atop of the Gainsborough Trinity 0-2 Atherton Collieries cake.