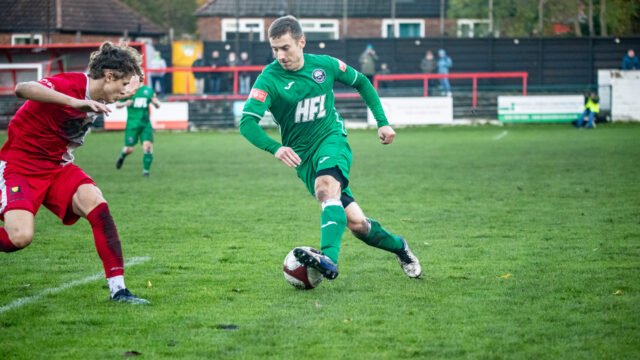 Atherton Collieries dropped out of the FA Trophy with a 1-0 loss to Ashton United, in what was a game of few chances at Hurst Cross Stadium. Osebi Abadaki’s second half strike from the bench sealed the win for the Robins, but in reality there was little to choose between the two sides.

A heavy downpour at kick off and an uneven playing surface meant that both sides struggled to find any decent rhythm in the early exchanges. Brad Cooke’s men were still without their talisman Marcus Cusani, serving the final game of his three-match suspension, with Aaron Smith instead chosen to lead the line.

The first chance of the game fell to Smith, the false nine’s effort volleyed into the side netting after Gaz Peet picked him out with a cross from the left. It was Peet making things happen again down the left flank again shortly after, cutting inside his defender but seeing his effort smothered by Oliver Martin in the Ashton goal.

Colls looked defensively solid for much of the first half, forcing the home side into trying their luck from long-range with efforts thwarted by Scott Sephton and Niall Battersby respectively. The Robin’s first real strike on goal came from Harvey Macadam, blazing one over Luke Hutchinson’s crossbar shortly following the break.

With the game looking destined for penalties, it was Osebi Abadaki who came on from the bench to get the breakthrough for the home side. A long throw-in from Adam Senior wasn’t cleared by the Colls defence and Abadaki was on-hand to finish from close range. The visitors felt aggrieved there was a foul in the build-up, but the ref waved away the protests.

With fifteen minutes to go Cooke rolled the dice, bringing Matty Gillam and Elliot Rokka into the fray as his side went in search of a late equaliser. Danny Lambert went closest for Colls, his snap shot inside the area sailing just wide of Martin’s goal. Gaz Peet went down in the box under challenge from Senior but the referee was unmoved by the penalty appeals.

In the dying seconds Ashton came close to doubling their lead, former Colls man Tom Bentham looping a header onto the roof of Hutchinson’s goal and Harvey Macadam breaking through one-on-one, only to be denied by a sprawling save from the young keeper. The final whistle brought an end to a game that was by no means a classic.

Colls are back in action on Saturday as they face South Shields at the Skuna Stadium. Kick off 3pm.