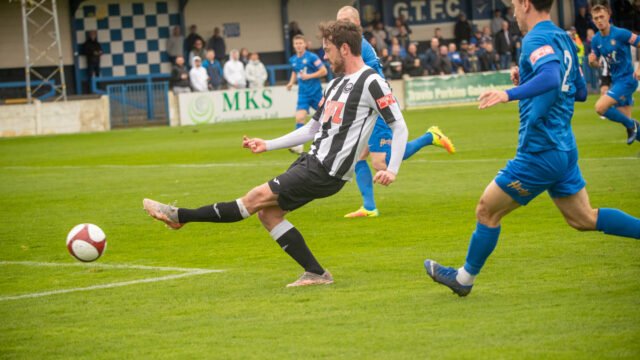 Atherton Collieries suffered a narrow 1-0 defeat away to Gainsborough Trinity on a bitterly cold and frustrating afternoon in Lincolnshire.

Colls travelled to the Martin & Co Stadium looking to bounce back from last week’s 2-1 home defeat to Mickleover, against an in-form Gainsborough side unbeaten in their last six. Brad Cooke’s men made a strong start to the game and really should have been ahead, Jack Lenehan and Matty Gillam both spurning glorious chances to net an early lead.

Unfinished chances often get punished and that’s exactly what happened on fifteen minutes, Gainsborough undoing the defence and Bradley Grayson firing the hosts into the lead. In a sweeping move, Lewis Butroid crossed in from the left and Grayson finished well, despite the valiant efforts of Luke Hutchinson in the Colls goal.

Colls were able to carve out a couple of half chances but couldn’t manage to draw level, Aaron Smith’s volley sailing wide after Luca Defreitas-Hansen nodded the ball down to him and Jack Lenehan’s show-stopping effort denied by an equally impressive save from Sam Long in the Trinity goal.

The home side were almost gifted a second just before the break, Colls giving away possession in their own half and Alex Wollerton set free one-on-one with the keeper. A heroic save from Luke Hutchinson ensured that the away side were still in the game at the interval.

In the second half, Colls dominated much of the possession as they searched for an equaliser while the home side looked to break with regularity. Luke Hutchinson was called into action again early in the half, acrobatically tipping a piledriver from Wollerton over his crossbar.

Cooke brought on Dylan Glass and looked to push his full-backs further forward as his side searched for an elusive goal. The gamble almost paying off when Gaz Peet’s marauding run saw him in on goal, only to skew his finish agonisingly wide. Jack Lenehan and Aaron Smith then both fired free-kicks high and wide from promising positions.

As the clock ticked down, frustrations began to boil over for the visitors, a clumsy challenge from Dylan Glass provoking an angry reaction from the Gainsborough defence and a twenty-man melee in the centre circle. Danny Lambert was handed a yellow card for his part in the fracas.

It summed up an ultimately disappointing afternoon for the Colls in which they only managed a single shot on target throughout the ninety. The black ‘n’ whites travel to Witton Albion on Tuesday night, where they’ll be looking to recover their scoring touch. 7.45pm kick off.