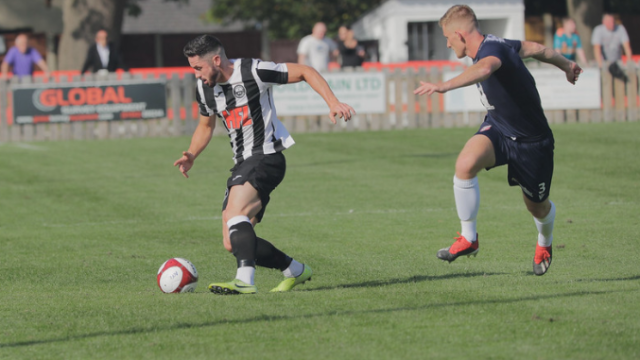 It was an opening day defeat for Colls at the hands of Scarborough Athletic with a brace from Boro’s Nathan Cartman giving the visitors the win. The Atherton sunshine was beaming down for the game, which marked the first competitive fixture played at the Skuna Stadium in 169 days.

Two goals scored by Scarborough’s No. 9 early in each half gave them a deserved victory, with the visitors harbouring title-chasing ambitions going into the season. However a series of missed chances for the home side in the second half might have Colls wondering what could have been at the final whistle.

The home side’s season got off to a slow start, with the black and whites finding themselves behind with just 48 seconds on the clock. The ball was hooked over the defence to Nathan Cartman who slotted home to give the Boro the lead, there was some suspicion of offside but the resulting shouts were waved away by the officials.

Boro almost doubled their advantage inside the first half, with Cartman’s effort striking the upright before Danny Taberner was on his toes to deny the rebound from close range. Colls fought their way back into the game, with an Elliot Rokka effort deflected narrowly wide and Jordan Darr seeing two chances fired into the keeper’s hands and side netting respectively.

After the break it was Scarborough however who doubled their advantage, Cartman latching onto a long ball from deep and slotting past Taberner to make it two to the visitors. Colls continued to chase the game, with Marcus Cusani looking particularly bright on from the bench, rattling the post after some quick footwork inside the box.

In the end, it was a tale of two strikers as Jordan Darr saw two glorious chances to score in the second half, the first scuffed into the hands of Ryan Whitley who was there again to deny the Coll’s striker from point-blank range after a cross in from Cusani. The Colls frontman looked dangerous all game and was desperately unlucky not to open his account.

Ultimately it was a frustrating afternoon for Colls but a performance they can take a lot of heart from going into the rest of the season. Speaking after the game, manager Brad Cooke said: “That’s what happens at this level, if you don’t take your chances at the right time you don’t win football matches. We’ve created a lot and I’ve no doubt that it will come, but right now it’s frustrating, but we’ve got to forget about that and move onto Bamber Bridge.”

Colls will be in action again on Tuesday night as they face Bamber Bridge at the Skuna Stadium in the FA Cup First Qualifying Round. Tickets are priced at £8 for adults, £5 for concessions, £3 for under 16s and £1 for under 12s.

Rama Spice Man of the Match: Danny Taberner (Sponsored by Tabs Every Weekend)