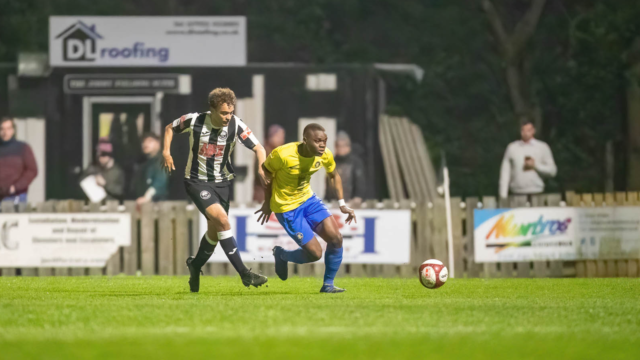 Atherton Collieries were defeated 2-0 by Warrington Town in their penultimate home game of the season, with first half goals from Stefan Mols and Josh Amis sealing the points for the yellows despite a spirited second half display from the Colls.

It was a poignant afternoon with the sun shining down on the Skuna Stadium, as the players were joined before kick off by the family of Holly Prince, with both sets of players and supporters coming together to pay a touching tribute to the 6-year-old who tragically passed away last weekend.

Colls started the game poorly and found themselves 2-0 down inside the opening twenty minutes. A penalty was awarded after just ten minutes, with captain Danny Lafferty judged to have handled in the area on his return from injury. Stefan Mols stepped up and dispatched from the spot.

Things got worse minutes later, as Warrington’s towering striker Josh Amis rose above the Colls defence and headed home to double the Cheshire side’s advantage. The striker was perhaps lucky to stay on the pitch before half time, escaping with a yellow after a nasty-looking elbow on Luca-Defreitas Hansen.

Collieries had more cause to feel hard done by before the break, Gaz Peet brought tumbling down in the box after getting the wrong side of Mitch Duggan. It looked a clear penalty but the referee waved away the furious appeals from Colls players and supporters, with Peet shown a yellow card for his own protests.

The home side rallied in the second half and perhaps should have pulled at least one goal back. Aaron Smith went closest, the midfielder inches away from converting Marcus Cusani’s teasing ball across the box, before Luca Defreitas-Hansen headed agonisingly onto the roof of the net from a golden position.

Warrington were able to see the game out and collect a valuable three points in their promotion hunt, with Colls putting in a spirited performance despite their place in the league for next season already secure. Colls attention will now turn to Monday night, as they travel to Radcliffe for our final away game of the season.