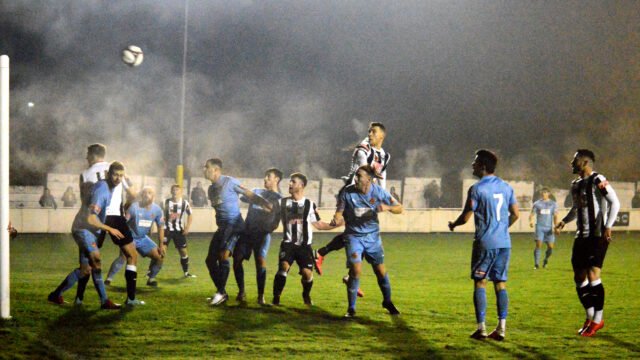 Atherton Collieries exited the FA Trophy at the third qualifying round stage with a 3-0 defeat to City of Liverpool FC at the Skuna stadium.

On a bitterly cold evening, goals from Dominic Reid, Jack Hazelhurst and Mitchell Bryant ensured that the visitors progressed through to the first-round proper of the competition on the eve of a second national lockdown.

Colls had the first opportunity of the game just five minutes in as Dylan Glass received the ball in the box and, despite losing his balance, the attacker managed to get a shot away which went just wide of the post.

It was to be ‘the Purps’ who would strike first though they netted the first goal of the evening through striker Dominic Reid just a minute later. He met Rhian Hellawell’s chip over the Colls’ defence and volleyed the ball past ‘keeper Danny Taberner to put his side in front.

Looking for a way back into the game, Brad Cooke’s men then saw captain Danny Lafferty’s header go narrowly over the bar as he rose highest to meet a corner taken by Vinny Bailey.

On the half-hour mark however, the visitors took advantage of a defensive error to double their advantage with a 30-yard volley from Jack Hazelhurst.

‘Keeper Taberner had moved towards the edge of his area to offer an option to Colls’ under-pressure midfield but had not anticipated his team-mates losing the ball. As the away side pressed high, the ball fell to Hazelhurst who made no mistake in firing into the empty net from 30-yards out.

Now two goals behind, Colls carried on pressing and were unlucky not to claw themselves back into the game before the half-time whistle as Gaz Peet had his free-kick saved by the City of Liverpool ‘keeper and Danny Lafferty saw another header go narrowly over the bar.

Half-time saw Jack Lenehan enter the field in place of Elliot Rokka in a bid to freshen up the Colls’ attack, but unfortunately for Cooke’s men the game was put beyond any doubt just five minutes into the second period.

Taberner made a great fingertip save to deny Hazelhurst from doubling his own tally on the night but could only push the ball out to the visitors’ Mitchell Bryant who tapped in from six yards out to make it 3-0.

More attacking substitutions were then made by the Black and Whites, both Jordan Darr and Ben Conway were brought on to try and break down a resolute City of Liverpool defence and Colls were unlucky not to do just that later on in the contest.

With a barrage of corners, Cooke’s men threatened and made life difficult for the visitors but could not manage to force the ball past Theo Roberts in the visitors’ goal.

The referee blew the full-time whistle to end what was an ultimately disappointing night for the Collieries.

Following the government’s announcements earlier this week regarding the halt of football in England from Step 3 of non-league downwards, this game will be our last until at-least the end of the lockdown period.

Our next scheduled fixture is now on Saturday 5th December, when we hope to welcome Morpeth Town to the Skuna Stadium in the Pitching In Northern Premier League, though supporters are advised to keep an eye on our website and social media for further updates nearer the time.

In the meantime, we encourage all Colls fans to follow government guidelines with regards to the Coronavirus Pandemic. Stay safe, stay indoors, help to save lives. We look forward to welcoming you back to the Skuna at the earliest possible time.