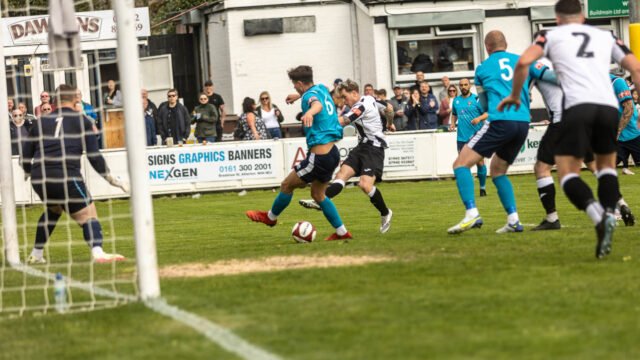 The Collieries season ended on a high with a 1-1 draw at home to Morpeth. With survival celebrations in full swing, Brad Cooke’s men were denied three points by an exceptional performance by Morpeth stopper Dan Lowson.

With end of season celebrations high on the agenda for Colls, the Highwaymen started the better of the two teams, and were good value to take the lead after twenty minutes of play. Bailey Geliher converted for the visitors following lax Collieries defending from a Ben Ramsey cross.

Following the goal, the Collieries began to find their foothold in the game. On-form James Hooper came the closest, breaking an offside trap to attempt a well-weighted lob over stopper Dan Lowson, unfortunately carried high and wide by an untimely gust of high winds.

The Stripes were galvanised following the half time interval, finding the equaliser on the 60th minute. Ethan Kershaw, ever reliable in the big moments all season, danced through the defence before slotting home under pressure, rewarding a fantastic season for the young midfielder.

Dan Lowson was the star of the show, producing a succession of top drawer saves to deny the hosts. Most notably producing a world class save well into injury time, tipping a swerving Rokka effort onto the bar and wide.

The season ended a successful one for the Collieries, with the squad, management, volunteers and supporters celebrating survival together upon the full-time whistle, alongside the incredible record of not conceding more than 2 goals in one game all season.

Following the game, the annual end of season celebrations commenced in the clubhouse, with two fantastic sets from our good friends Johnny Foreigner either side of our end of season awards.

We would like to thank all supporters for your incredible support throughout this campaign, and we look forward to seeing you all back at the Skuna Stadium in pre-season!