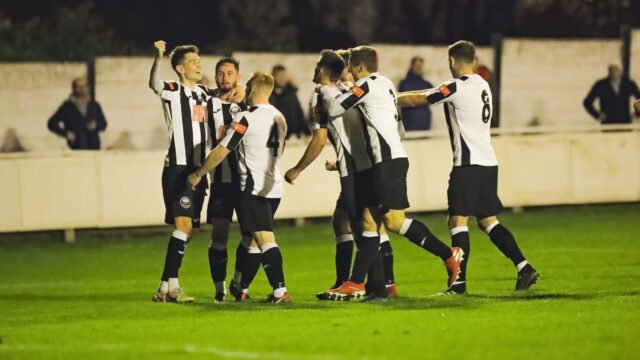 Atherton Collieries progressed to the semi final of the Lancashire Challenge Trophy, dispatching Conference North opposition Chorley 4-2 at the Skuna Stadium. A brace from Marcus Cusani and goals from Clive Smith and Rowan Roache inspired the win, with Adam Blakeman and Willem Tomlinson striking for the visitors.

Despite being drawn as the away side in the tie, a last-minute fixture reversal meant the game was played at Atherton’s Skuna Stadium rather than Chorley’s Victory Park. Despite shooting up the ‘considerable bank’ in the first half, the hosts made their home advantage pay, unsettling the Magpies’ back-line from the off and forcing a smart save from James Aspinall inside the opening minute.

Colls’ opening goal came as the result of beautifully-worked passing move, Marcus Cusani and Gaz Peet combining down the left before squaring to his opposite wing-back Clive Smith who tapped home at the far post. It was only the defender’s second goal in a Colls shirt, and his first strike since netting in our 2-2 FA Cup draw with FC United back in 2019.

A cheaply conceded free-kick down the other end gave Chorley their route back into the game, Atherton’s grumbles dismissed by the referee as Adam Blakeman stepped up and curled a stunning left-footed effort into the corner, restoring parity for his side. It was a great strike and Luke Hutchinson in between the sticks for Colls had no chance.

The visitors’ lead was short-lived, as Rowan Roache picked up the ball 30 yards out and drove at the defence after the restart. Beating two defenders, he showed great composure to slot his low finish underneath the keeper, striking back immediately for Colls and seeing them carry a deserved 2-1 lead into half-time.

After the interval Colls continued to surge forwards, Marcus Cusani’s pace and the hosts’ quick one-touch passing causing nightmares for the Magpies. It was a gift from the Chorley defence that lead to Colls’ third, Cusani latching onto a sloppy pass at the back and skilfully lobbing it over the stranded James Aspinall from 25 yards out, extending the home side’s lead to a comfortable one.

The fourth followed shortly after, Cusani again picking up the ball out on the right-hand side and racing free of the Chorley defenders. Bearing down on goal one-on-one, the winger went for power in the finish and his driven effort proved too much for Aspinall in the Chorley goal, capping a miserable afternoon for the keeper.

With the clock ticking towards full time Chorley grabbed a late consolation, Willem Tomlinson weaving his way across the Collieries box and finishing hard and low past Luke Hutchinson to reduce the deficit. Far from mounting a late comeback, the final chance of the game fell the way of Colls, Matty Gillam inches away from poking home a fifth in the dying seconds.

The final whistle saw Colls comfortably into the last four of the competition, reaching the semi-final stage for the second time in consecutive tournaments. The Colls faithful will now be eagerly awaiting the draw for the next round, and and hoping their side can go one step further in this years trophy.

Speaking after game Colls manager Brad Cooke said: “From the first whistle I thought we were the better side. All over the park,  I thought we were first to every ball, every second ball, we were dangerous on the break and defensively we looked really good. All-round it was a very pleasing night.

I’m so proud of this group. They’ve dealt with everything that’s been thrown at them, we’ve been low on squad numbers, [before Saturday] the lads hadn’t played for seventeen days, so to win two really tough fixtures in the space of four days is a credit to them and I’m delighted for them.”