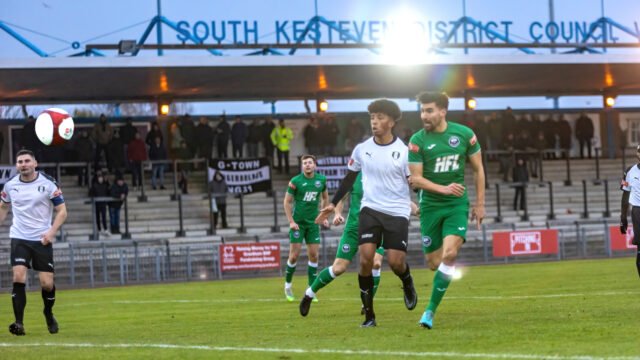 The Collieries returned to playing action with a professional & gritty 1-0 victory at Grantham Town, after two weekends away from the pitch.

In tough conditions in South Kesteven, the game was initially slow to settle as both teams adjusted to the high winds & rain during the opening stanza.

However, the Stripes soon adjusted and eventually gained their foothold in the match during the 19th minute.

From a free-kick following a cynical body-check from Grantham’s Glynn Yala on Gaz Peet, Ethan Kershaw floated an inviting cross into the box, and the star-spangled man Luca Defreitas-Hansen powered a header home, giving the Collieries the lead in-front of the ever-loyal traveling faithful.

Controversy ensued after 27 minutes of play. Grantham’s Gregg Smith, a physical presence and combative target man, caught the Colls’ Joel Amado with an arm during a 50/50 on the half-way line. Following a brief stoppage whilst the defender received treatment, Smith was handed a yellow card, a decision which was questioned by both sets of supporters.

The next major opportunity fell for the Colls during the end of the first period. Clive Smith played an inciting cross which found the ever-creative Ethan Kershaw, who headed wide a golden opportunity to double the lead.

Grantham returned for the restart reinvigorated. Though the possession of the ball lay with the hosts more often than not throughout the second half, resolute defending from the Collieries limited the Gingerbreads to speculative efforts and half-chances.

The best opportunity of the match fell to the aforementioned Gregg Smith. With ten minutes of play remaining, the disruptive center forward won a header at goal, and produced what was undoubtedly a save of the season contender from Luke Hutchinson, who tipped the ball wide at full stretch with lightning quick reflexes, the highlight of a fantastic showing from the stopper.

Throughout the late pressure, the Collieries defended professionally and crafted some dangerous counter-attacks of their own. Zack Clarke, a Chester loanee making his Stripes debut, caused particular problems for the Grantham defence.

Ultimately, the Colls successfully held on for a well deserved triad of points, with the Grantham possession coming to limited opportunities and no avail.