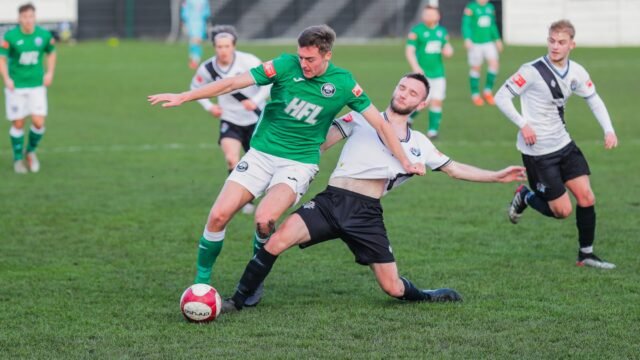 On Saturday Brad Cooke’s men continued their preparations for return of the Pitching In Northern Premier League as they travelled to fellow Greater Mancunian side Mossley. Despite it being a mid-season friendly, this was another tough test for the black and whites, but a confident, organised and committed performance saw the Colls run out 1-0 winners.

Mossley made the strongest start to the game with winger Jesurun Uchegbulam causing the Atherton back-line headaches throughout the 90. Eight minutes into the game the tenacious forward showed good pace to overlap Danny Lambert and cross a ball into the area. Captain Danny Lafferty was on hand, however, as he met the cross with a diving header to clear.

Seconds later the Collieries stretched their legs as Marcus Cusani pelted down the left wing, cut inside and tapped across to Jack Lenehan. Just outside the six-yard area, the midfielder fired an effort straight into the palms of Liam Lovell – the keeper’s gloves certainly warmed here.

Cusani was central to the action once again on 12 minutes. An ambitious clearance from Lovell saw the keeper out of position. The ball fell to the alert forward 30 yards from goal who, having looked up, lobbed an effort just wide. Lovell let off on this occasion.

Seel Park has played host to many great games, and whilst this one may only have been a mid-season friendly both sides offered strong midfield and defensive displays. Whilst efforts on goal were limited and often tame, both committed to keeping each other out of their respective boxes. This was no run-out, a competitive edge throughout.

The only other chance of note in the opening 45 fell to Cusani once again. 25 minutes on the clock saw Peet – playing in a once familiar left wing position – chase a loose ball down under pressure. The winger crossed a pin-perfect ball for Cusani who met it with a deaf header towards goal. The forward was unlucky as the ball floated just wide. A smart, improvised move from Cooke’s men.

With 53 minutes on the clock, the deadlock was broken. A Colls ball forward was settled in midfield and played out to Peet on the left wing. As the number 7 attacked with his usual agility, Ben Conway worked himself into a favorable position inside of the area. Peet played through, Conway collected, rounded two defenders and curled into the back of the net. A superb finish from Conway, Peet credited for an insightful assist here.

Lenehan came close once again on 77 minutes, a sharp pass and go move from Atherton saw the midfielder swing wide from the edge of the area.

As the clock ticked down, the Collieries looked to be the likely victors. With three minutes to go Cooke’s men had a good opportunity to confirm this as substitute Louis Myers did well to chase down a loose ball deep in the top right corner of the field. The forward, however, could only fire high and wide after he cut inside.

A strong, organised and creative display from Atherton made it two wins out of two since the November pause. Cooke’s lads worked hard throughout the 90 against an equally as organised opposition. After the game the Gaffer spoke of his pride and pleasure following this performance, ‘I think we’ve shown a completely different side to us this afternoon. Tuesday night (a 3-2 victory away at Runcron Linnets) we played some good stuff whereas today we have shown how organised we can be’.