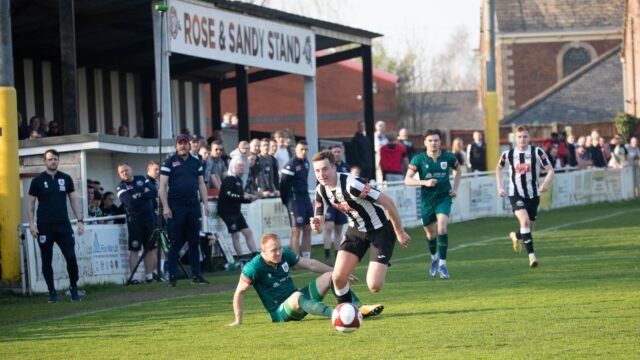 Atherton Collieries were unlucky to fall to a 1-0 defeat away at Radcliffe Borough in their penultimate game of the season. Jo Cummings’ first half header ultimately settled the game, despite a handful of chances for the black and whites in the second half.

Colls’ final away trip of the season was a short journey across Greater Manchester to the Neuven Stadium to face near neighbours Radcliffe. There was little to separate the sides in the table going into the game, however both sides’ went into the fixture comfortable in the knowledge they are safe from relegation this season.

Brad Cooke’s men made a bright start to the game, Marcus Cusani looking a threat early on as Colls put some slick passing movements together. The forward saw a volley well-blocked in the box and might have been better served going for goal moments later, when his cut-back was intercepted after running through one-on-one.

Danny Taberner was kept on his toes in the first half, with Radcliffe forward Luca Navarro twice attempting to catch him off his line from the distance, the keeper adjusting well both times to make the save. However, the hosts snatched the lead from one of the resulting corners, defender Jo Cummings powering home a header at the near post.

Colls pushed forward in search for a way back into the game, with Jack Lenehan and Aaron Smith both forcing saves from Jack McIntyre in the Radcliffe goal with efforts from distance. Ethan Kershaw was on-hand before the break to stop Boro from doubling their lead, clearing a goal-bound effort from Navarro off the line.

Playing with the bit between their teeth in the second half, Colls had the ball in the back of the net just minutes after the restart. James Hooper capitalised on a weak save from Jack McIntyre to poke home from close-range, however offside flag on the near side quickly cut short any celebrations.

Brad Cooke made an attacking change, with former-Radcliffe man Elliot Rokka taking to field in place of Niall Battersby. The substitution almost paid off immediately, the attacking midfielder nutmegging his man on the edge of the box before hitting a strike agonisingly against the bottom of the post.

With the clock ticking down, Colls threw everyone up the pitch in the search of a goal but found the finishing touch elusive as Radcliffe defended ruggedly. Goalscorer Jo Cummings was perhaps luckily to escape a red card deep into added time, for a professional foul on James Hooper who was bearing down on goal.

Ultimately it was Radcliffe’s day and Colls search for a victory will continue to their final game of the season, at home to Morpeth next Saturday.