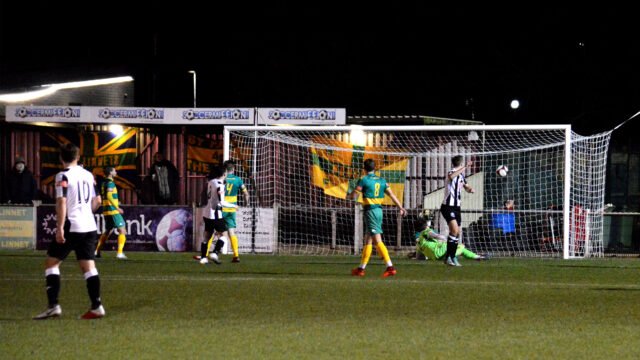 41 days after their last match, Atherton Collieries returned to action with a 3-2 victory in a mid-season friendly at Runcorn Linnets.

Three first half goals from Elliot Rokka (2) and Marcus Cusani secured the victory for Brad Cooke’s men, with the home side pulling two goals back in the second half.

On a bitterly cold evening, Colls started well and had the lead 10 minutes into the contest as Elliot Rokka drove a shot into the back of the net and past former ‘keeper Paddy Wharton from the edge of the area.

Soon after, the Black and Whites doubled their advantage with a great piece of finishing through Marcus Cusani. Following a save by the Linnets ‘keeper, Cusani picked up the ball with his back to goal and used the back of his heel to flick it past two defenders and into an unmanned goal.

Now two goals to the good with less than 15 minutes played, Cooke’s men pushed for a third and looked sharp in attack.

A focal point of the threat, Rokka helped himself to a second goal of the evening shortly before half-time to round off an emphatic first-half performance.

Some nice link-up play saw a cross into the Linnets’ area which was superbly taken down by the forward with one foot and swept in with his other, leaving Wharton with no chance.

At half-time, Cooke made a pre-planned substitution as new signing Louis Myers came onto the field in place of Lewis Doyle. Doyle got injured on the opening day of the season against Scarborough and has been working hard on getting up to speed over the enforced break.

Having dominated the first half, Colls were unlucky to be denied a chance to add a fourth just minutes into the second 45 as Gaz Peet was seemingly fouled in the area but the referee did not award the penalty.

Linnets took hope from this and lead by former Colls player Iwan Murray, they raced up the pitch on a counter attack with Murray being brought down just outside the box by a Colls defender.

From the resulting free-kick, the home side pulled a goal back with an impressive finish and Linnets used this as a springboard as they started to pile the pressure on.

Cooke’s men fought against this though and created chances through Myers and Rokka along with others, but were made to pay 15 minutes from time as the home side grabbed a second.

Colls ‘keeper Danny Taberner punched clear a cross into his box, but the ball fell to an attacker on the edge of the area who curled past Taberner and into the back of the net to put the home side within touching distance of an equaliser.

In the closing stages, the visitors now knew that they had to dig in and that’s exactly what they did. Defensively solid, new signing Joel Amado helped the side to see the game out and victory was sealed at the final whistle.

Information regarding Colls’ next fixture will be made in due course.