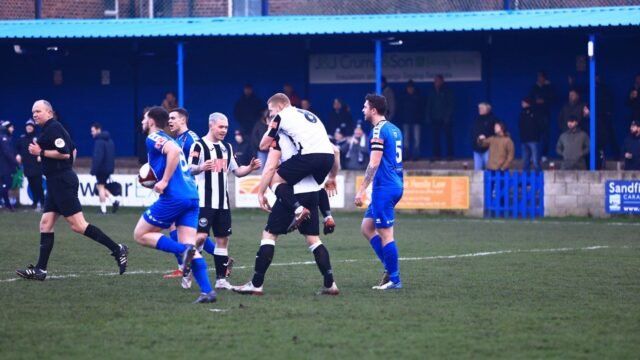 In contrast to the “pea souper” fog enjoyed en-route to North Yorkshire, the game was played in remarkably sunny conditions, enjoyed by all of the large Collieries faithful who made the journey.

The Stripes got off to the best of starts, as Gaz Peet received a heavy-handed clattering in the box from a Whitby defender, being awarded an early penalty. The skipper Danny Lafferty stepped up, and leathered his effort down the middle to confidently take the lead.

In the interests of fairness, it must be added that Whitby likewise should have claimed a penalty of their own moments later, as a similar incident occurred in the Colls own penalty area.

The Colls continued to play on the front foot throughout the first half, with Luca Defreitas-Hansen coming closest with a far post header from a Jack Lenehan corner.

New signing Declan Daniels impressed on his debut for the Colls, and particularly shone with his link-up play between attack and midfield. This was most apparent in his involvement in the Colls second goal, a worldie from none other than Clive Smith.

Bringing down a difficult long ball with ease, Daniels laid off a simple pass to bring Rowan Roache into play on the wing. After a brief run, Roache played a searching cross into the box and found the marauding Colls full-back, who scored a rare goal for the club with a spectacular diving header, evoking memories of Ryan Salmon’s goal at Kendal in October 2017.

The second half began very much in line with the first, with Whitby again struggling to contain the threat of Luca Defreitas-Hansen from a set-piece.

The hosts did test the Colls defensive resolve more regularly following the half-time break, and noticeably applied some pressure for a solid stint of the second half. However, it must be noticed that Bradley Cooke’s Stripes held on throughout, and threatening forays into the penalty area were limited at best.

The balance of play re-entered Colls control with the introduction of Matty Gillam and Elliot Rokka from the substitutes bench. The pair of forwards led from the front with an intense pressing game, and combined with the ever relentless Ethan Kershaw, the game was soon dictated by the Colls once again.

The two forwards also combined to twice come close to increasing the Colls lead, as the Stripes began to hunt for a remarkable third goal. On both occasions, Rokka found Gillam with a near post cross, with both efforts flicked narrowly wide from a difficult position by the Colls top goalscorer.

Gaz Peet was likewise a constant thorn in the side of the Seasiders as the game came to a close, producing two excellent runs into the box after collecting the ball from deep, with the second almost producing a goal of the season contender as the quintessential wing-back troubled the Whitby stopper with a powerful effort.

In the final minute of the game, Danny Taberner finally received the first true threat upon his goal, producing a low dive from a Malik Dijksteel header.

The final whistle was blown moments later, as the lads once again received a standing ovation from the jubilant & over-served Black & White faithful.

Next up, the Collieries return to action at the Skuna Stadium for the first time in 2022, as we welcome Stafford Rangers for another tough test.