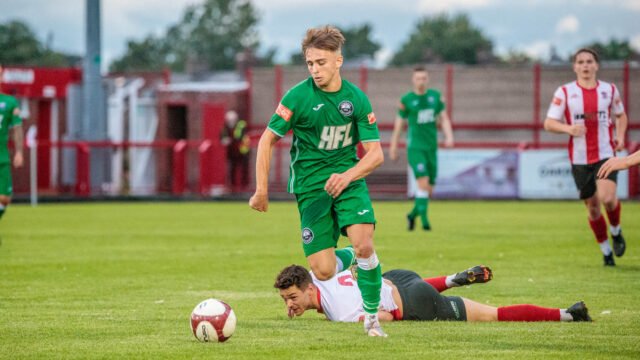 Brad Cooke’s Black & Whites recorded victory in their final pre-season outing of the campaign, courtesy of a silky Jay Fitzmartin solo effort on his first official outing in the Stripes.

The first half was a fairly evenly matched contest, with few clear chances for either team. The Colls looked confident with the ball at their feet throughout, enjoying some exciting passages of play whilst under pressure from an Albion side including the all-familiar Elliot Rokka.

The first major chance of the game fell to the Collieries after the ten minute mark, as Marcus Cusani narrowly headed over whilst tightly marked at a corner. Witton Albion recorded their first shot not long afterwards, as an Elliot Rokka free-kick was fired straight into the wall.

Declan Daniels was incredibly unlucky not to score in the dying embers of the half. Following some nice build-up play in the center-circle, new signing Jay Fitzmartin caught the Albion defence off-guard with a lovely through ball to the Collieries forward, whose effort beat Ollie Martin in the Witton goal but flew agonisingly wide of the post.

The momentum swung into the Collieries favour in the second half, as the lads came out from the interval re-invigorated. Jay Fitzmartin, who has grown in confidence with every game throughout pre-season, stole the show with his performance throughout, and deserved what would turn out to be the winning goal.

Picking up the ball forty yards from goal, the young forward shrugged off the efforts to dispossess him from three Albion defenders, before coolly stroking home from just inside of the penalty box.

The Collieries continued to control for the remainder of the game, with Jack Lenehan and Marcus Cusani both unfortunate not to give the Black & Whites a more comfortable margin of victory.

Next up, Atherton Collieries season begins with a trip to FC United of Manchester on August 13th, before our return to the Skuna Stadium against Stafford Rangers on August 16th, followed by Hyde on August 20th.

We will be hosting a Ground & Works Party at the Skuna Stadium this Saturday (August 6th) from 10am. We would like to thank our fantastic community for your support and hard work throughout the off-season, and we hope to see as many faces as possible at the Skuna this Saturday as we make one last push ahead of the big kick-off!