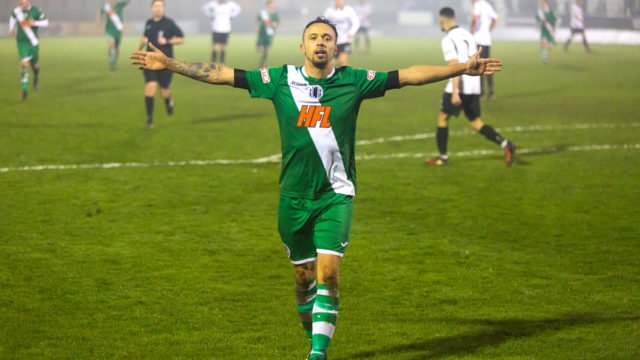 Overwhelmed. That was a word to describe how we all felt when we rocked up at Keys Park, the impressive home of Hednesford Town in the semi-final of the Integro League Cup. At the time, it was possibly the most professional setup that Colls had had the pleasure of playing at. Little did we know what we were about to see unfold.

The latest photo in our series of snapshot series is of Jordan Cover, celebrating after scoring Colls third goal in the 4-1 demolition of Hednesford in April 2018.

Coming into the match, Michael Clegg’s side were the underdogs. They were up against strong opposition in Hednesford who plied their trade in the division above. Don’t forget either, that Colls were the new boys in this competition having only been promoted out of the NWCFL months earlier.

It was actually Cover who opened the scoring just after the half time break, with a smart finish into the top right hand corner. Brad Cooke, now manager of the club, doubled Colls advantage moments later with a well taken header.

By the time Cover made it 3-0 on 70 minutes, the home fans at Keys Park were silenced and in a state of shock. Raising his arms up and lapping up the celebrations of the travelling Colls fans, this photo will always bring back memories of what will go down as an iconic night in Colls history.

Ben Hardcastle, who had an outstanding match, rounded off the scoring in the closing moments to set up a final against Coalville Town which was featured in the previous snapshot article.

You can watch the highlights of the match below.