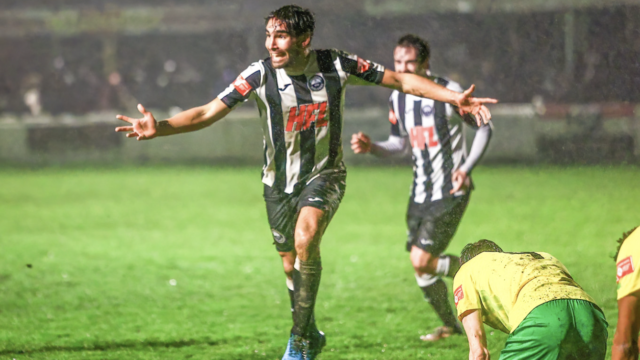 Atherton Collieries are excited to confirm the first of our retained players for the 2022-23 season, with Joel Amado, Luca Defreitas-Hansen, Marcus Cusani, captain Danny Lafferty and perennial record breaker Gaz Peet all signing renewed terms with the club.

Defender Joel Amado re-signs for his second season at the Skuna Stadium, making his debut at Hyde in August after initially joining before the 2020 annulment. Joel has now made 38 appearances for the Stripes, including a memorable and vital goal against title challengers Matlock, whilst also finishing third in the highly coveted Supporters Player of the Season vote.

After beginning his second stint at the Skuna in 2020, winger Marcus Cusani has become a focal point for the Collieries in the Northern Premier League, leading both our goals and assists charts for the 2021/22 season for the joint Golden Boot award, including memorable braces against Chorley and Basford. Marcus signs after now reaching 66 appearances and 9 goals for the club.

Luca Defreitas-Hansen made an instant impact for the club after signing in August 2021. Now with 40 appearances and 3 goals to his name, the American center-half became an instant fans-favourite following his late winner at Hyde on the opening day. Luca signs after ending the season with the best defensive record at the club, alongside winning the Committee Player of the Season award.

Gareth Peet signs after reaching 365 appearances for the Colls over the 2021/22 campaign. With his 7 winners medals for the club alongside innumerable end of season individual accolades, Gaz is now undisputedly the most decorated player in Colls history, and has been terrorising opposition defences with his bursts of pace & killer free-kicks since 2010. Gaz finished third in the Colls ’21/22 Golden Boot award, with 4 goals and 9 assists.

Captain Danny Lafferty has also re-signed for the 2022/23 campaign. Finishing the season on 224 appearances for the club, Laffs has been a key figure as the Stripes have settled in the Northern Premier League’s top division.

With the Collieries finishing an incredible fifth in the league’s goals conceded charts, alongside the superb record of not conceding 3 or more goals in a single competitive 90 minute match over the course of the ’21/22 season, we are absolutely delighted to announce the retention of four key defensive players for the ’22/23 campaign.

We will announce further player signings & retentions in due course. Player sponsorship details will also be announced in due course.

We would also like to place on record our gratitude to Adam Green, who has departed the club after a seven-year spell as goalkeeping coach. Adam has been a popular member of the club throughout his time at the Skuna, and will remain a friend to us all.