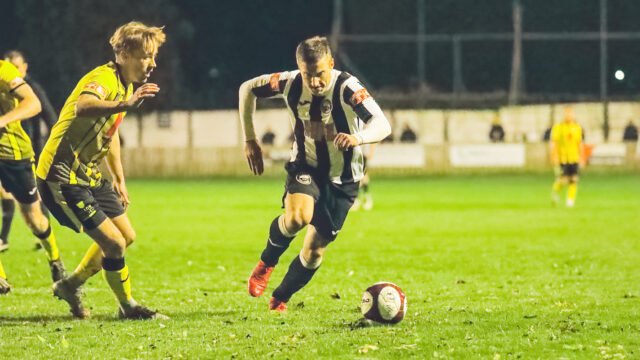 Atherton Collieries are excited to announce we have signed contract extensions with four members of playing staff. Niall Battersby, Clive Smith, Gaz Peet and Rick Smith are the first members of the Black & White squad to formally commit for the 2021-22 season, with further updates to follow imminently.

Joining the Skuna Stadium from Hindsford in the summer of 2019, 20-year old defender Niall Battersby has since made 29 appearances in the black and white stripes, impressing with his defensive maturity and understanding combined with his technical ability. Niall is sponsored by MIDAS Roller Shutters, Astley.

Clive Smith made his Collieries debut in December 2018 and has remarkably started every match since, becoming an ever reliable member of our defence. The 23-year old has now made 67 appearances at right-back for the Colls, scoring one goal. Clive is sponsored by Mark Riley Plumbing and Heating.

Commanding center-half Rick Smith returned to the Collieries in July 2020, having first made his debut on-loan from Ashton United in 2017. Only missing one game of the 2020-21 season, Rick has quickly become another main-stay of the black & white backline, and has also notched three goals for the club. Rick is sponsored by “My Cross to Bar”, Colls USA.

First playing for the Colls in an August 2010 defeat to AFC Blackpool in the North West Counties First Division, Gaz Peet has been a significant presence for the Collieries over the last decade. A consistent defensive influence with an offensive threat to match, Gaz has now made 314 competitive appearances for the Collieries, winning three league titles & promotions and four additional cup competitions, alongside countless end-of-season individual honours. Gaz is sponsored by Tomlinson Tax Returns.

Speaking on the extensions, manager Brad Cooke said:
“We’re absolutely delighted to get these lads over the line after a really challenging few months for the football club. For them to agree to stay is a real complement to the club as a whole, especially with offers elsewhere which have been turned down. Happiness coupled with the right environment can still win over money, which is ironic after the events of the last few days!”

We are excited to confirm these first squad announcements of the 2021-22 season, and Colls fans can look forward to further updates in the near future.